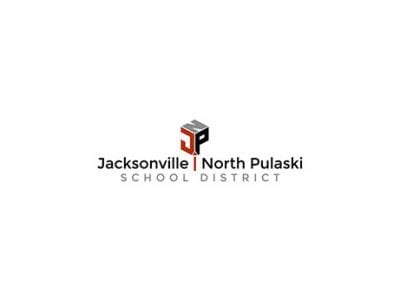 School board discord leads to an apology

JNPSD board member Watson verbally attacks cohorts and cites frustration with colleagues while $6,714 for her travel expenses are questioned.

Travel and training expenses paid for Jacksonville-North Pulaski School Board member LaConda Watson over the school’s first two school years are five times higher than the next highest amount paid to a board member. A discussion of travel and training policy at a board training Monday devolved into Watson’s expletive-laced and angry attack on other board members, Dena Toney in […]

The Cabot Planning and Zoning Commission on Tuesday approved the site plan for an indoor shooting range in downtown. Unlimited Firearms and Outfitters, 302 S. Second St., is moving to 201 S. 10th St., in the former New Life Church building. The commission approved a special use permit in the C-2 commercial zone for the business to have a shooting […]

Already at least a month behind schedule on implementing a series of proposed changes to the state’s Medicaid expansion program, Arkansas Works, Gov. Hutchinson still has received no word on the federal approval he needs to move forward. Last week, Hutchinson met with federal officials to plead his case. “I have personally visited with numerous administration officials making the case for […]

Jacksonville hospital no longer offers in-patient surgery as top executives say they must continue to reduce costs and move in a new direction.

Rock Bordelon and Don Cameron – the chief executive officer and chief financial officer respectively of Allegiance Health Management in Shreveport and two of the three owners of North Metro hospital – sent a letter this week to hospital employees acknowledging the loss of doctors and the cutting of services, but promised that the hospital would be a “successful facility.” […]

Cynthia Dale Dornblaser, daughter of Marcia and Jim Dornblaser of Jacksonville, became the bride of John David Blohm, son of Susan and Doug Blohm of Stuttgart, on Nov. 4 at First United Methodist Church in Jacksonville. Rev. Nathan Kilbourne officiated the wedding.  The bride is the granddaughter of the late Vernelle and Oscar Gray of Jacksonville and the late Owen […]

The state Supreme Court on Thursday awarded Mike Wilson of Jacksonville $2,796 in court costs in his successful appeal to shut down as unconstitutional scheme by legislators to funnel general improvement funds to projects and entities in their districts. The court, which upheld Wilson contention that GIF funds were unconstitutional, remanded the case back to Circuit Judge Chris Piazza the […] 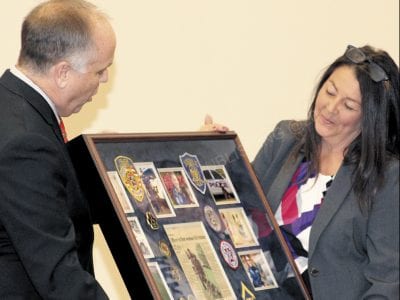 Regina Boyd saluted for her long and successful career in law-enforcement.

Jacksonville Police Department K-9 officer Regina Boyd retired on Thursday, ending her 31-year career in law enforcement. She was with the Jacksonville department for 24 years.  Jacksonville City Attorney and Police Director Robert Bamburg presented Boyd with a shadow box, which contained patches, pins, photos and a 2008 article from The Leader about her becoming the city’s first female K-9 […]

Firefighter honored for service to Cabot

Cabot Fire Engineer Matthew Yandell has been named the city’s employee of the month for November in recognition of his hard work and dedication during the month of October. The fire and police departments held their annual charity softball game in October. Yandell planned the game for the fire department. The game raised more than $1,500 for The Cabot Christmas […] 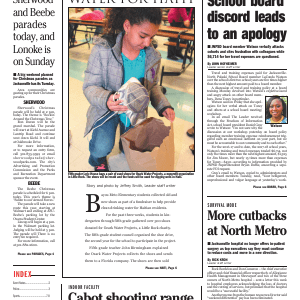 Teenager is arrested for murder

Naketrius Haney, 17, of Little Rock was arrested on Thursday for the murder of a Jacksonville man in November. He will be charged as an adult.  Christon Xavier Ander-son, 25, who lived at 9 Coral Lane in Jack-sonville, was found shot dead around 12:40 a.m. Nov. 5 in a vacant lot at Henderson Road and East Valentine Road. “Evidence put […]