Sylvan Hills plays hard until the end at Maumelle

At Maumelle High School Friday night, the Sylvan Hills Bears went down in defeat to the Hornets by a final of 74-71. The fast-paced game was close the entire way, with neither team leading by more than three at the end of the first three quarters. Maumelle (10-6, 3-2) did go ahead by 14 with just over two minutes to […]

The Jacksonville girls’ basketball team beat Parkview in early December in the Wampus Cat Invitational, but could repeat that effort when the two teams met in a conference matchup in Little Rock on Tuesday. The Lady Patriots avenged that 61-45 defeat with a 70-60 victory over Jacksonville in the league matchup at Parkview High. The two teams were in a […]

By danny west, Special to The Leader

FAYETTEVILLE – With his new staff now complete, Arkansas head football coach Chad Morris is finalizing the recruiting territories for each of his assistants. Not surprisingly, there’s a heavy emphasis on the state of Texas, particularly in the Dallas-Fort Worth area where Morris plans to divide the metroplex among five different coaches. Morris is also doing something unique in the […]

Turnovers continue to be a key problem as the Jacksonville Titans lost for the third time in four conference games since Jan. 2. The Titans gave up the ball 25 times, including nine times in a disastrous second quarter, en route to a 62-51 loss at Parkview High in Little Rock on Tuesday. The second-quarter doldrums actually started late in […]

Cabot gets one back with upset of Conway

A week after suffering an upset loss, the Cabot Panthers pulled off their own upset victory when it traveled to Conway and knocked off the Wampus Cats 66-62 in double overtime. Cabot led almost the entire game, but never by more than seven points, and it was Conway that blew the last possessions for the win at the end of […] 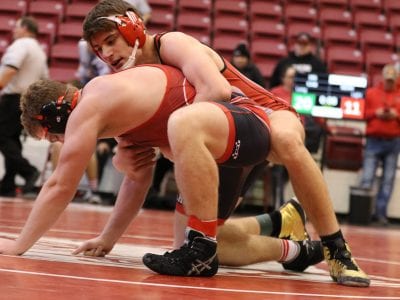 The Cabot Panthers wrestling team hosted a tournament on Saturday, and won its first team trophy in three years. The Panthers compiled 326 points to take second place behind Searcy’s 491. Rogers finished third, Little Rock Central fourth and Catholic rounded out the top five in the nine-team tournament. The Panthers had seven medalist finishing in the top four, and […]

Drive safely out there

The National Weather Service in Little Rock reported 0.3 inches of snow fell at Little Rock Air Force Base late Monday and during the early hours Tuesday, yet nearby communities reported much more: 3.5 inches in Lonoke, 2.5 inches in Cabot, 1.7 inches in Austin. Jacksonville reported 1.5 inches. Road conditions are hazardous despite what some drivers may believe. School […]

Jacksonville budget shows that spending on law enforcement has gone up and down in recent years.

A review of police budgets and violent crimes from 2009 through 2016 shows violent crime is down slightly in Jacksonville and the budget for police salaries and benefits are up $1.2 million. In 2009, each violent crime had an average police price tag of $22,678, but in 2016 – the last year statistics are available for – each violent crime […]

Sherwood • Two Sherwood women have been arrested for attempted capital murder and first-degree domestic battery. Beatrice Hadley, 21, and Kiara Gilbert, 24, allegedly attacked a 21-year-old man New Year’s Day at the Park Crest Apartments on Manson Road. He was treated for his injuries at CHI St. Vincent Hospital-North. The women were apprehended in North Little Rock and are […]