NLR sirens too slow to sound alert over storm

Eight minutes can mean getting the family sheltered or not, and that can mean life and death during a tornado or severe storm. Any delay in a city’s warning system is unacceptable, according to North Little Rock officials. Because of a lag in sounding the alarms Saturday, the city activated its automated WeatherWarn software program Tuesday to alert residents immediately […] 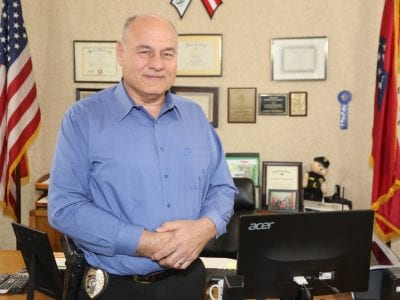 City council recognizes Bedwell as an officer with growing city since 1989.

Sherwood Police Chief Jim Bedwell was recently honored with a 30-year service pin at a recent city council meeting. “We don’t give many of these out,” said Capt. Jeff Hagar. “You just don’t see too many people stick it out in one place for 30 years.” If the chief had actually started his career in Sherwood, it would have been […]

The final numbers for 2018 are in and Lonoke came in under budget, spending about $6 million less than it took in. The city council approved the final tally in the form of an ordinance at its regular Monday night meeting. The council had approved a budget of $18.1 million for 2018, expecting that much money to come in and […]

Jacksonville • Corey Branch, 22, of Cabot was arrested on March 5 for allegedly having a stolen truck. Police were called at 10:19 a.m. to 721 Graham Road for a suspicious incident. Branch was in a white 2017 Nissan Titan that was reported stolen in Conway. He told police he was looking for scrap metal. Branch had the key fob […]

Dennis Sobba Dennis Leroy Sobba of Jacksonville died peacefully at his home on March 1 after a lengthy battle with cancer. He was preceded in death by his parents, Tony and Clara Sobba of Garnett, Kan., and his son, Dennis Lee Sobba. Left to cherish his memory, his loving wife of 61 years, Nancy Sobba; a daughter, Trudy (Dennis) Akins; […]

Carlisle residents are cleaning up after a tornado left debris and damage just south of the city limits on Saturday. Sirens sounded about 10:30 a.m. and expired about 11:30 a.m. According to the National Weather Service in North Little Rock, the tornado was rated an F1, traveling at speeds between 73 mph-112 mph. Doyne Carpenter, who lives on Skipper Road […]

Mayor promises more accountability on who is using plastic for what.

The Ward City Council meeting on Monday became contentious during talk about credit card charges, statements and in-state travel and reimbursements. The council voted 4-2 against council members Robin Hefner and Chasity Scott requests for copies of monthly credit card statements of purchases and services by department heads be made available. The mayor and the financial director are able to […]

The facility is more than 60 years old and needs $4 million in improvements.

The campaign to invest $4 million to improve North Little Rock Municipal Airport started with letters presented to the city council at their Oct. 8 meeting. Now the city council seems set to approve funding for the plan. Several businesses voiced their concerns about the substandard facilities and lack of infrastructure at the airport, 8200 Remount Road. During the meeting, […]

Lonoke resident Lee Glover Langdon, 15, became an Eagle Scout during a Boy Scouts ceremony on Sunday at Lonoke First United Methodist Church. Langdon is a 10th grader and member of Troop 101 of Carlisle. He is one of the first to reach Eagle Scout in Lonoke in nearly 20 years. Eagle Scout is the highest level in Boy Scouts. […]