Students worked hard to prepare for the exam, both scoring 36, highest result possible, the first time two Cabot students in the same class did that.

Two Cabot High School juniors each scored a 36 on the ACT college entrance exam, the highest composite score possible. Madeline Johnson and Ethan Peck, both 17-year-old juniors, took the state ACT test in February. They found out their results last Saturday. Johnson said, “I was shocked and wasn’t expecting it. My parents freaked out.” She took the ACT five […]

The Lonoke County Quorum Court last week approved funding $235,000 for the sheriff’s office to purchase new replacement patrol vehicles. JPs allotted $112,000 to purchase four vehicles that are currently on order. The county will provide an addition $123,000 for five more vehicles that will be financed. Sheriff John Staley asked JPs for nine vehicles and needs 11 vehicles. He […]

Keeping them alive at shelter

Cabot will embark on a plan to become a no-kill shelter by this summer.

The Cabot Animal Shelter plans to be a no-kill shelter by this summer with the support of the city council. On Monday council members passed a resolution in support of declaring the city a “no-kill” community with its animal shelter and said Cabot is the first city in the state to pass this resolution. Cabot Animal Shelter director Mike Wheeler […]

The Jacksonville City Council will hold a public hearing at 7 p.m. Thursday for neighbors to talk about a guinea pig rescue operation in a residential area. Linda Jones is the director of Guinea Pig Slave Rescue and runs it at her home on 1315 Lee St. It is the only guinea pig rescue in the state and one of […]

The new 24-hour Kum & Go convenience store in Jacksonville opened on Thursday at the Main Street fork. City officials desribe the approximately $6 million project as a new gateway to downtown Jacksonville and expect further building projects in the area. Next week the city will begin landscaping a small section in front of the 5,600- square-foot gas station, where […]

For Cody Hamilton, a fifth grader at Bobby G. Lester Elementary, it has been a very good year as he has won two major essay contests. The first was right before Christmas, writing about being a military child. He took top honors in a contest sponsored by Little Rock Air Force Base, and he won a very nice bicycle. Recently, […] 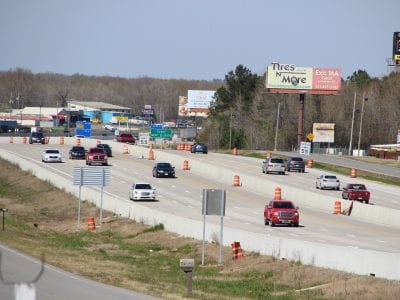 Although finishing touches still await – erecting signage, for instance – the three-laning of Hwy. 67/167 in each direction between Hwy. 5 at Cabot and Vandenberg Boulevard at Jacksonville is complete, according to ArDOT spokesman Danny Straessle — and according to our own test run. The 4.6-mile widening from the Vandenberg interchange to state Hwy. 5 in Cabot cost $79.2 […]

Little Rock Air Force Base paid tribute Friday to Senior Airman Shawn Arnold McKeough Jr., the young airman who was killed in a holdup at a North Little Rock gas station on March 15. Funeral services will be held on Saturday in Westbrook, Maine, his home town. The alleged shooter and his three accomplices have all been charged with capital […]

The Cabot softball team was better than Conway at the plate in sloppy game with seven combined errors and seven combined unearned runs. The Lady Panthers tallied 12 base hits to just seven for the Wampus Cats for an 11-5 victory. Both teams were hot early, but the Lady Panthers kept it going throughout while Conway failed to score in […]