HOT SPRINGS – Sylvan Hills volleyball picked up an efficient, 3-0 win over Sheridan Tuesday in the first round of the Class 5A state tournament at Bank of the Ozarks Arena. The Lady Bears won by scores of 25-15, 25-13 and 25-20, and did so largely by playing measured volleyball, not going for every big hit and allowing the Lady […]

Jacksonville volleyball falls to Lake Hamilton in the 5A state tournament.

HOT SPRINGS — The Lady Titan volleyball team saw its remarkable season come to a close Tuesday. Jacksonville, the No. 2 seed from the 5A-Central, lost 3-1 to 5A-South three seed Lake Hamilton in the first round of the Class 5A state tournament at Lakeside High in Hot Springs. The loss brings Jacksonville’s final season record to 22-9, which is […] 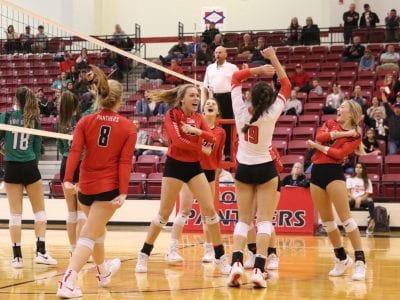 The Lady Panthers bounced back from a game-one loss to beat Van Buren in the 7A state tournament.

After an outstanding last round of conference play, the Cabot Lady Panthers turned their focus on the 6A State Tournament and defeated the Van Buren Lady Pointers, 3-1, on their home court in Panther Arena. Cabot is hosting the event. Van Buren won the first set, 25-20, Cabot the second 25-23, Cabot the third 25-22, and Cabot the fourth and […]

NLR ready for rematch with Bryant

Charging Wildcats will be in unusual position as big underdogs as they prepare to travel to take on the No. 1 ranked, unbeaten Hornets.

North Little Rock will be playing an unfamiliar role of the hunter when it takes the field at Bryant High School on Friday. The Charging Wildcats have spent the last three seasons as the hunted in the 7A-Central Conference. Before losing to Catholic two weeks ago, it had been more than three years since North Little Rock had lost a […]

Traffic death • An Austin man died on Sunday in a one-vehicle crash in Lonoke County. Terry Shaw, 63, was driving a 2001 Chevy Cavalier at 5:03 p.m. on Hwy. 319 West near Morrison Road. The car ran off the road and struck a ditch bank. Shaw was taken to the University of Arkansas for Medical Sciences. The weather was […]

Lonoke to get more money

By holding fast and doing its research, the Lonoke City Council signed an agreement worth three times the amount that was first offered. Back in June, Greg Staggs from Integrisite, a telecommunications company from Louisiana, proposed a lease for a 50-foot-by-50-foot piece of ground to put a monopole behind the Lonoke County Museum. This monopole would help give Lonoke more […]

Central Arkansas group based in Jacksonville will meet in North Little Rock.

FREE Whit Davis president left a lasting impression with all who knew him.

Terry Toney Terrell “Terry” Lee Toney, 50, of Cabot passed away on Oct. 25. He was born on July 22, 1969, in Jacksonville to Howard Vance Toney Sr. and Carolyn Gordon Toney. He was a loving husband, father and friend to all who knew him. He was an avid Razorback fan and season-ticket holder for over 10 years. He loved […]

School district to give up headquarters, move to police and fire training building.

The North Little Rock Police Department has offered the school district temporary use of the police and fire training building at 2400 Willow St. in exchange for permission to demolish the district’s administration building at 2700 N. Poplar St. earlier than previously scheduled. The school district had already agreed to vacate its current headquarters sometime next year in exchange for […]