Sherwood • Kirstie Thomas, 29, was arrested on Aug. 3 on drug charges. Police made a traffic stop at 7:57 p.m. at 7533 Warden Road on a green Ford F-150 truck for driving at a high rate of speed through the Links apartment parking lot. The truck had a large crack in the windshield, obstructing the driver’s view. The passenger, […]

The $30 million facility near freeway and Main St. should open next summer.

Revenues have dipped some, but the city council unanimously agreed to give 2 percent raises to its workers as the economic slump from pandemic goes on.

Despite the financial hardships experienced by many cities across the state, the North Little Rock City Council voted to give its full-time and part-time employees and elected officials a 2 percent raise Monday evening. The measure passed unanimously. This was expected but the original bill didn’t include a raise for part-time employees. Before Monday’s meeting, Council Member Linda Robinson requested […]

Tests down as positive cases drop

It’s too early to know that Gov. Asa Hutchinson’s mask mandate has begun to slow the growth of COVID-19, but Tuesday the governor reported only 383 cases, even if the number of people tested was a meager 4,140. That’s the lowest number of new cases since the first week of July, and less than a week since the Aug. 6 […]

Stanton Sapp Stanton Leroy Sapp, 87, passed away in the early hours of Aug. 9. He was born June 17, 1933, in Saint Petersburg, Fla., in an old red house to the late Edwin Sapp and Selma (Letzring) Sapp. Stan graduated from Vilonia High School in 1951, enlisted in the Army in October 1951, and married his high-school sweetheart, Shirley […] 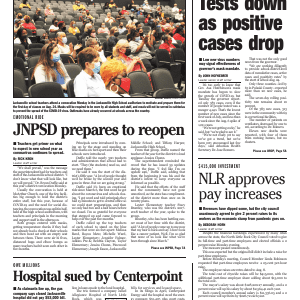 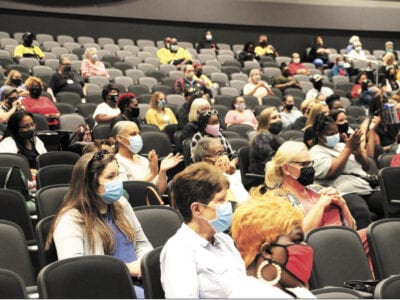 Teachers get primer on what to expect in new school year as coronavirus continues to spread.

“We shall prevail,” was the message the superintendent had for teachers and staff of the Jacksonville school district. “I don’t know what that will look like, but we will prevail,” Dr. Bryan Duffie said at this year’s district convocation Monday. Usually the convocation is held at McArthur Church, one of the few facilities big enough to hold the district’s entire […]

As claimants line up, the gas company says closed Jacksonville hospital did not pay $53,000 bill.

The owners of the closed North Metro Hospital are still being sued for unpaid bills. The latest is Centerpoint Energy claiming the hospital owes them $53,000. The hospital closed abruptly in late August 2019 and was then foreclosed on by First Arkansas Bank and Trust in September. The case will be heard by Circuit Court Judge Tim Fox, but no […]

Lonoke County gets high marks, wants to do more

Ranks ahead of White and Pulaski counties, but better outcomes needed.

Lonoke County is the 10th best county when it comes to health outcome, according to the University of Wisconsin’s Population Health Institute. But the Wisconsin study shows that 43 percent of Lonoke County residents are obese and 47 percent do not have access to exercise opportunities. The city of Lonoke is looking to improve on those numbers. Pulaski County ranks […]