COVID-19 has killed at least one million people worldwide and more than 205,000 in the U.S., as Arkansas’ plight has continued to worsen.

One million people around the world have died from the COVID-19 virus, and more than 205,000 Americans have perished from the pandemic. Arkansas accounted for 1,350 of those deaths, 21 one of them in the preceding 24 hours. Don’t try telling an Atkins resident or school kid the virus is a hoax — one of those deaths was that of […] 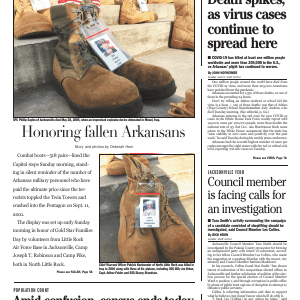 Council member is facing calls for an investigation

Tara Smith’s activity surrounding the campaign of a candidate convicted of shoplifting should be investigated, said Council Member Les Collins.

Every day is a good story for Titan star

There are players who coaches like, and there are players who coaches can’t get enough of. Jacksonville senior Ryan Royshad Ready epitomizes the latter. Ready is an unconventional two-sport star. He’s a three-year starter for the Titan football team and a four-year starter in baseball. What makes him unconventional is that, instead of being the speedy skill position player like […]

Sherwood council hopeful may have moved to Cabot, and other suits are possible.

Sherwood City Council Member Kevin Lilly has had to file a lawsuit to make sure his opponent who moved to Cabot doesn’t get elected. Meanwhile in Jacksonville, someone will have to do the same or Lance Dulaney, who withdrew his candidacy for city council, could still win. Brian Poe of the Pulaski County Election Commission explained that the commission is […]

Although delayed because of the COVID-19 pandemic, a downtown developer has asked the North Little Rock City Council for permission to renew his efforts to make his mark in Argenta. His request was unanimously approved at the council’s Monday night meeting. Council members decided to give J. Chandler and Co. a second chance at purchasing the city-owned property at Main […]

Panthers replace COVID-stricken Southwest with road trip out of state to Memphis.

The Cabot Panthers will travel to Collierville, Tenn., on Friday instead of to Little Rock. The Panthers’ scheduled 7A-Central Conference game against Little Rock Southwest was canceled because too many Southwest players are in quarantine for potential exposure to COVID-19. Cabot announced the replacement game on Monday. The Collierville Dragons are members of the Region 7 Conference of Tennessee’s largest […]

Gov. Asa Hutchinson, in his weekly briefing Tuesday, cited the White House coronavirus task force that said Arkansas last week had twice the national rate of new COVID-19 cases with 194 positives per 100,000 population compared with the national rate of 93 new cases per 100,000. COVID-19 is spreading in Arkansas as the number of positive cases surpassed 82,000 in […]

Traffic Death • Jerry Clendenin, 34, of Jacksonville was killed on Sept. 25 on Hwy. 67-167 in North Little Rock after he was hit by a vehicle. Clendenin was a pedestrian when he was struck by an unknown vehicle around 8:07 p.m. at mile marker 3. The weather was clear and the road was dry. Sherwood • Kaylee Cathcart, 26, […]

The Leader was named the best large weekly in the state for the 12th time in 13 years. We collected a record 34 awards from the Arkansas Press Association on Friday, including general excellence and the prestigious I.F. Stone Award for our investigation into an illegal meeting by some Jacksonville City Council members. The I.F. Stone award, named for the […]