Sylvan Hills rolls up 35 in the first half to mercy rule West Memphis High.

Rest assured they are the Sylvan Hills Bears and not the Rolling Hills Bears, but they climbed back to new heights on Friday. A week after a shocking 10-7 loss at Marion, the Bears ran roughshod over and through West Memphis to win 35-13 at Blackwood Field in Sherwood. Sylvan Hills scored all its points in the first 17 minutes […] 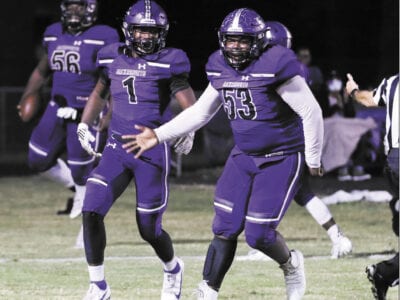 Lonoke gets rout of SB Southerners

Lonoke’s freshman quarterback Bradon Allen led the Jackrabbits to victory Friday night at home, beating Batesville Southside, 52-21. Allen took over midway in the first quarter when starting quarterback Spencer Peeper went down with an injury. Allen didn’t do all the heavy work. He was helped by a solid defense that nabbed four fumbles or interceptions and the Southside’s center […]

The Cabot Panthers put up nearly 600 yards of offense and quarterback Tyler Gee threw for a school record six passing touchdowns, but a 21-0 halftime deficit was too much to overcome as Conway got out of Panther Stadium with a 52-49 win on Friday. The Wampus Cats (3-2) spoiled Cabot’s homecoming and handed the Panthers (5-1) their first loss […]

Badgers get past JHS girls

Beebe and Jackson-ville volleyball teams followed the same pattern when they met in Beebe on Tuesday as they did when they played in Jacksonville a few weeks ago. Beebe pulled out another 3-1 victory, winning game one handily 25-14, losing game two 21-25 and then going on to win games three and four by scores of 25-14 and 25-19. Both […]

Titans bounce back from a 13-point first-quarter deficit to win a last-minute replacement game after Maumelle drops.

The Jacksonville football team got off to another slow start, but this time overcame it in a 46-39 win at Hamburg High School on Thursday. The game was scheduled earlier in the week when Maumelle canceled the Titans’ 5A-Central Conference matchup because of potential COVID-19 exposure and quarantine. It was Jacksonville’s first win since the season opener, and one that […]

The Charging Lady Wildcats ran their volleyball winning streak to eight straight Thursday while also avenging an earlier loss. The North Little Rock ladies beat Mount Saint Mary Academy 3-0 to remain in first-place tie atop the 6A-Central Conference. Scores of the match were 25-22, 25-21 and then a dominant 25-13. Mount Saint Mary is the last team to beat […]

All three initiatives on the November ballot should be rejected. Issue One will make the half-cent sales tax in 2012 that was pledged to pay off a bond issue to build four-lane highways permanent — including the I-30 widening project — after the bonds are paid off in 2023. It would make permanent a sales tax that lands most heavily […]

Maggie Waymack-Cope, chairwoman of the parks and recreation commission and a junior high science teacher, is challenging Council Member Norma Naquin for her Ward 3, Position 1 seat.

Cabot City Council Member Norma Naquin is seeking re-election against Parks and Recreation Commission chairwoman Maggie Waymack-Cope for the Ward 3, Position 1 in the November general election. Naquin has been a council member for 3.5 years. Early voting starts Oct.19. Norma Naquin, 65, is married and has two grown children. She has lived in Cabot since 1996. Naquin is […]

Ward 2, Position 2 incumbent seeking a third term and is challenged by co-owner of HVAC company and a former council member who is an Aramark salesman.

Cabot City Council Member Damon Bivins is running for re-election for Ward 2, Position 2 in the November general election. Bivins is seeking his third term and has been on the city council for four years. Early voting starts Oct.19. He is being challenged by small business owner Brandon Hillenburg and past council member Jon Moore. Damon Bivins, 51, is […]

Round of up places to cast ballots for the Nov. 3 general election.