FAYETTEVILLE – After trailing by seven with less than 30 seconds to go, the Cabot Lady Panthers had a chance to win or force overtime, but couldn’t hit at the buzzer in a 37-35 loss to Rogers in the first round of the Class 6A state playoffs. The Lady Mountaineers led 37-30 and was at the free-throw line with 36 […]

Panther softball team slips by White Hall on the road, hammers Pottsville at home to remain undefeated on the year.

The Cabot softball made a few mistakes, but held off a Bulldog rally for a 5-4 road win at White Hall on Tuesday. The home team held a 1-0 lead from the first inning until Cabot tied it up in the fourth. The one run was unearned after White Hall’s leadoff hitter Lilly Hood reached on an infield error. The […]

West Memphis goes inside to take back lead and move on to second round of 5A playoffs.

HOT SPRINGS – The Sylvan Hills girls hung tough most of the way, but the much larger West Memphis Lady Blue Devils proved too big to overcome, taking a 53-42 victory over the Lady Bears on Thursday in the first round of the Class 5A state tournament. West Memphis was depleted by injuries and COVID-19 for much of the season, […]

Panther softball team slips by Lady Bulldogs on the road, hammers Apaches at home to remain undefeated on year.

FAYETTEVILLE — The Charging Lady Wildcats were a nemesis to the Bentonville school district this week in the first two rounds of the Class 6A basketball state tournament. The North Little Rock ladies had little trouble with Bentonville West in the first round. The 6A-Central No. 3 seed mercy ruled the 6A-West No. 6 seed 66-36 to advance to the […]

Sylvan Hills boys race out to large lead and withstand West Memphis rally to move to quarterfinal round of state.

HOT SPRINGS – Sylvan Hills dominated the early going and built a huge lead, but then had to hold off a furious West Memphis rally to avoid a major upset in the first round of the Class 5A state tournament on Thursday. The Blue Devils cut a 21-point second-half deficit to as little as five, but the Bears held on […]

Carroll Barron Carroll Koonce Barron, 87, of Cabot passed away on March 6 in Sherwood. He was born in Fordyce (Dallas County) on Jan. 25, 1934. He was preceded in death by his parents, James Cleveland Barron and Rowena Koonce Barron; his sister, Minnie Reba Owen; and a brother-in-law, George Mayronne. Carroll is survived by his loving wife of 64 […]

Assistant superintendent sees progress in new school district as she and others step away.

Along with former Superintendents Bobby Lester, Tony Wood and Bryan Duffie, Assistant Superintendent Tiffany Bone has helped fashion the newish Jacksonville-North Pulaski School District in a manner to prepare students – they are known there as scholars – for success after high school, and she’s proud of it. Bone, 50, notified board members and staff Monday that at the end […] 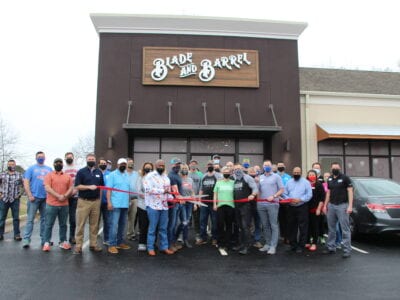 Blade and Barrel in Jacksonville offers fresh beer, food and even haircuts at 140 John Harden Drive.

Blade and Barrel in Jacksonville, a microbrewery and barber shop, opened Thursday with a ribbon-cutting grand opening. It is the second microbrewery in the state to open in a dry area. Ouachita Brewery in Polk County opened last year. Blade and Barrel is a private club-restaurant at 140 John Harden Drive. It can be accessed off Marshall Road and is […]

After discovery of first virus case last March, central Arkansas is reporting 22.1 percent over age 16 getting one shot and 13.6 percent are now fully vaccinated.

A year ago Thursday, James Black, COVID-19 patient zero, walked into Jefferson Regional Medical Center. The pandemic had surfaced in Arkansas. Until then, no new cases, no deaths, no hospitalizations in the state. On Feb. 26, 2020, then-President Trump had boasted, “You have 15 people, and the 15 within a couple of days is going to be down to close to zero.” Since then, nearly 30 million U.S. […] 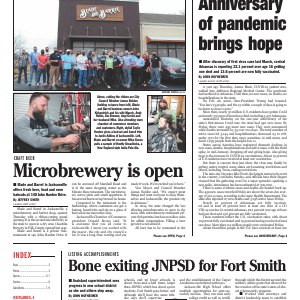