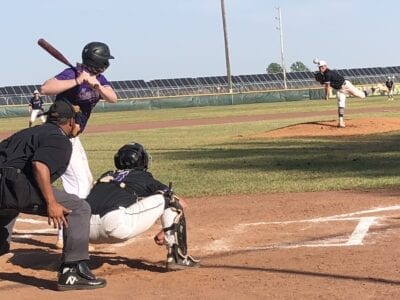 The Lonoke Jackrabbit baseball team dominated Central Arkansas Christian for a 10-0, five-inning win in a nonconference matchup Monday at the Lonoke Ballpark. Freshman southpaw Jaxon Ingle mowed down the Mustangs, pitching all five innings and allowing just one base hit. He struck out 12 of the 15 outs he recorded while walking just two batters.  Meanwhile, Lonoke piled up […]

Lonoke softball’s offense explodes for one win, but errors lead to loss to Bauxite.

The Lonoke softball team split a pair of high-scoring games with Bauxite and Bald Knob on Saturday at the Lonoke Ballpark. The Lady Jackrabbits opened the day with a 14-12 loss to Bauxite before beating Bald Knob 15-5. Lonoke piled up 18 base hits. The Lady Rabbits built a 10-4 lead through three innings and still led 11-9 going into […]

Titans get win 1over PA Bruins

Jacksonville takes early lead and never relinquishes it in a nonconference matchup Friday.

Jacksonville handed visiting Pulaski Academy an 8-2 loss in a nonconference baseball matchup on Hickingbotham Field at Dupree Park on Friday. Sophomore Seth Gray pitched a gem, going the seven-inning distance and allowing just six base hits. He needed just 95 pitches, striking out five and walking one while allowing two earned runs. The Titans only had four hits, but […]

A long way to go on jabs

The vaccine rollout in Arkansas has been slow, but more people are taking their first and second doses and doing their part to defeat coronavirus. The state Health Department  reported Tuesday that more than 1.4 million shots have been put into the arms of Arkansans. With most people requiring two shots — the single-dose Johnson and Johnson vaccine is on […]

State Police * Jackie Junior, 66, of El Paso, was killed on April 11 in a motorcycle crash. Junior was riding a 2000 Harley Davidson north on Hwy. 5 north of El Paso at 6:47 p.m. The motorcycle went off the road and hit an embankment. Junior was ejected and pronounced dead at the scene. The weather was clear and […]

Frankie Thomas Frankie Mae Ray Thomas, 87, of Jacksonville passed away April 10. She was born August 18, 1933 in Arkadelphia to the late Frank Wash Ray and Zettie Mae Collie Ray. Frankie was a 1951 graduate of Bismarck High school and she married her classmate Arlie Thomas form Bismarck, March 15, 1952, celebrating 69 years of marriage. She accompanied […]

J&J vaccine paused, but no shortage

Following new guidance by the Centers for Disease Control and Prevention and the Food and Drug Administration, Arkansas has paused administration of the Johnson & Johnson COVID-19 shot, Gov. Asa Hutchinson said Tuesday, but the state has enough Covid vaccine from other manufacturers to continue vaccinations without pause. The interruption, which could be as short as a few days, is […]

FREE A movie crew to spend half a day in small town and borrow police cars.

Hollywood movie makers have fallen in love with Lonoke, Mayor Trae Reed told the council Monday night. Reed asked the council for permission to allow a movie company to take over city hall and three police vehicles Friday for a half day or so for a movie it’s filming. Reed didn’t have a lot of details about the movie, but […] 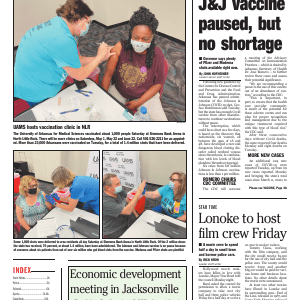