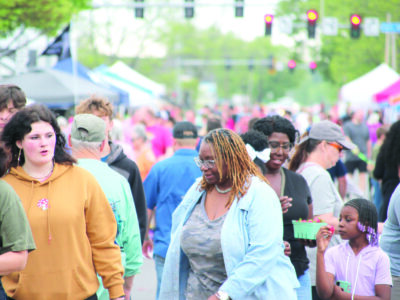 The Cabot Strawberry Festival, presented by the Junior Auxiliary of Cabot, returned to downtown Cabot with booths and food on Saturday after being canceled for two years due to the Covid pandemic.

Lonoke looks back on 150 years

Lonoke marks its sesquicentennial this year for its founding on Jan. 22, 1872. The city held a 150 year celebration on Sunday at the Lonoke Business Academy. The event had many speakers discuss the city’s past and toward the future. Lonoke’s roots date back to 1862, when Rumbough and Robinson, engineers for the Memphis and Little Rock Railroad and E.D. […]

JNPSD to receive $6.5M from state

About $6.5 million in state partnership funds approved for two Jacksonville North Pulaski schools was among $92 million approved Thursday by the state Public School Academic Facilities and Transportation commission. That’s about $4.7 million toward replacing Bayou Meto Elementary School and $1.8 million toward a new Murrell Taylor Elementary. The JNPSD board Monday set up a 5:30 p.m. workshop May […]

Fewer jobs here than before start of pandemic

Central Arkansas job growth is recovering but is doing so a little slower than the U.S. Average, Metroplan Planner Jonathan Lupton wrote in the April monograph “Little Rock Regional Economy” in 2022. By January of this year, employment in this region was 365,700–about 1,100 lower than the pre-pandemic peak two years earlier. On a job-trend graph, the Little Rock region’s […]

Staley and his two challengers in the May 24 Republican primary talk about experience and goals.

Lonoke County Sheriff John Staley is being challenged by retired North Little Rock Police Lt. Larry Behnke and former Cabot Police Lt. Keith Graham in the Republican Primary Election on May 24. Early voting starts May 9. The winner will be unopposed in November. The Leader sent questions to the candidates. Here are their responses: Staley, 42, is married and […] 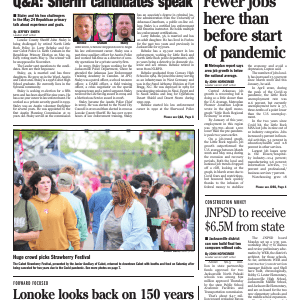