The Owls allow opponents to score for first time this season, but it didn’t matter.

Southwest Christian Academy Lions did something no one else has been able to do against the Abundant Life Owls — the Lions scored more than one touchdown against the Owls. By the time the Lions scored their first touchdown, the Owls already had four touchdowns on the score board and sailed to a 60-20 win at Jacksonville High School Friday […]

North Little Rock edged out the Little Rock Parkview Patriots 28-27 in double overtime to win 28-27 for the Charging Wildcats’ first win of the season. North Little Rock took on the 5A-South team at home in nonconference play. Parkview scored the first touchdown of the night at 5:50 of the first quarter with a 9-yard run. The extra point […] 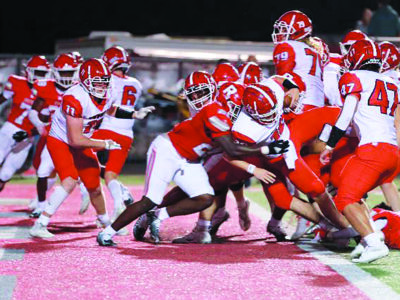 Cabot Quarterback Abe Owen goes in for the Panthers’ second and last touchdown from the one yard line. Owen gained 55 yards on the ground and more than 150 yards in the air but it was not enough to secure the victory. The Panthers lost to the Bearcats, 17-14. Cabot plays Jonesboro next Friday.

Outmatched out of state, Ruston topped Cabot in final seconds with a field goal.

The Cabot Panthers made a long trip down south to Ruston, Louisiana Friday to play the Ruston Bearcats in a non-conference game 14-17. Ruston is ranked second in their 5A division, with Cabot being ranked fourth in the 7A division. The Bearcats were the first to strike scoring the first touchdown and extra point. Evion Jimmerson was close behind but […] 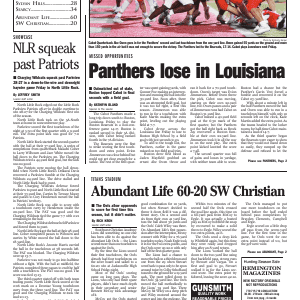